Today, The Hon Barry O’Farrell AO presented his credentials to the President of India, His Excellency Ram Nath Kovind, in India’s first ever virtual credentials ceremony. Mr O’Farrell takes over as Australia’s 21st High Commissioner to the Republic of India. “I am immensely honored to be taking over as Australia’s new High Commissioner to India – a role that will allow me to expand the ties between our two countries and importantly to advance the interests, the opportunities and the futures of citizens of both our two countries,” Mr O’Farrell said. 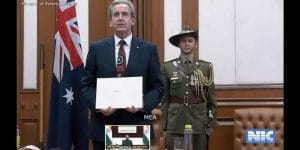 India and Australia are like-minded democracies with a shared commitment to a free, open and inclusive Indo-Pacific region. Significant trade and economic relationship; strong strategic and defense ties; Indian diaspora in Australia driving the substantial education, cultural and tourism links; and deepening people-to-people linkages – make India one of Australia’s closest partners in the Indo-Pacific.
“It is an exciting time to be in India, which as a civilizational power will have an enormous role to play in shaping the post-COVID world. I believe this crisis will bring Australia and India even closer together as two Indian Ocean democracies with complementary values,” he added. Reminiscing his first visit to India, the High Commissioner said, “Urged on by my friends in Australia’s remarkable and entrepreneurial Indian diaspora, I first visited India ten years ago looking for potential economic opportunities ahead of a state election campaign. I have been visiting regularly since and have witnessed the great transformation in India and in the Australia-India partnership.”
Mr O’Farrell will also have non-resident accreditation to Bhutan. Australia and Bhutan enjoy a warm relationship, built on strong people-to-people links and cooperation on international education.
Mr O’Farrell served in the Parliament of New South Wales from 1995 to 2015, including as the State’s 43rd Premier between 2011 and 2014. As Premier, Mr O’Farrell initiated and led annual trade missions to India to promote economic, cultural and social links between New South Wales and the states of India. He has also served as NSW’s Special Envoy for India and has made a significant contribution as the Deputy Chair of the Australia India Council Board.
Mr O’Farrell has a Bachelor of Arts from the Australian National University, Canberra. Born in Melbourne, Mr O’Farrell grew up in Darwin. He is married to Rosemary and they have two adult sons.